Narni – Geographic center of Italy, situated in the province of Terni, in the region of Umbria.

It’s a typical Umbrian town, built on a hill 790 feet above sea level with 20.570 inhabitants and strong medieval traces. The town has outstanding views over the river Nera valley and the wide plane of Terni. Narni offers artistic, archaeological, and religious itineraries, plus an abundance of natural history for the tourist. The town’s theater dates back to 1.856.

It is surrounded by cultural gems, including the renowned cities of Perugia, Assisi, Todi, Spoleto.

How to reach Narni by plane:

Those who would like to take advantage of our private transportation options should arrive and leave accordingly to the dates and schedule in which the service is offered.

Bus from the Rome Fiumicino Airport to Narni:

Bus from Narni to the Rome Fiumicino Airport:

Please send us your arrival and departure time, airline, and flight number before June 15.

How to reach Narni by train:

Please let us know by June 15 if you arrive by train.

How to reach Narni by car: 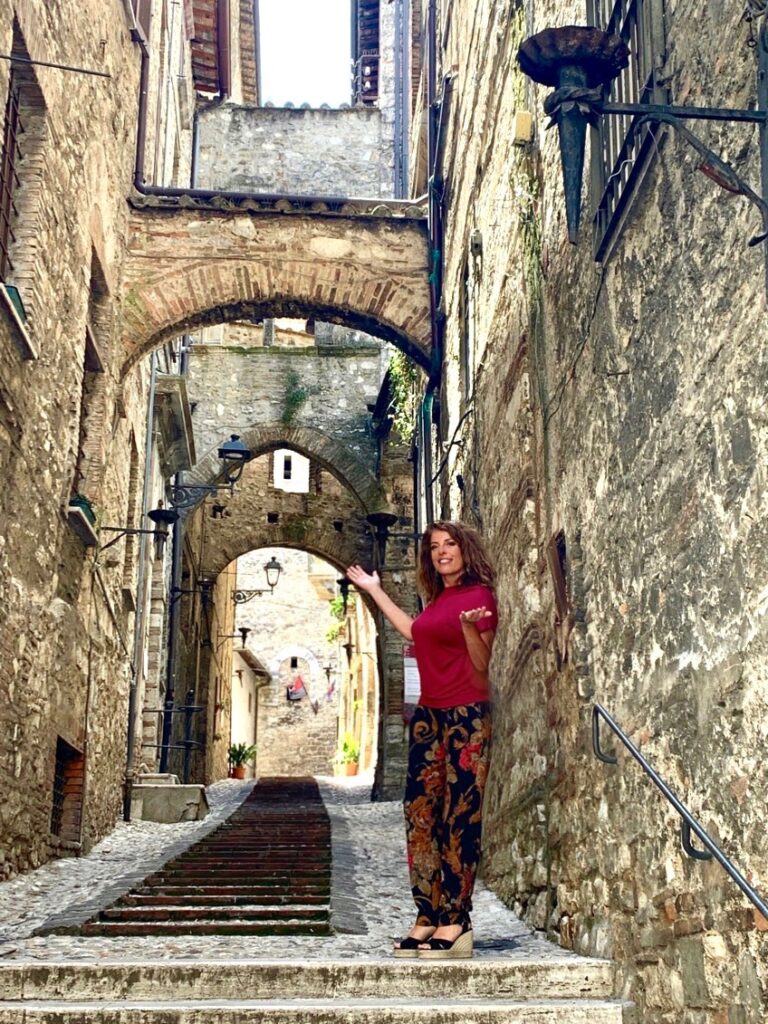 Although Neolithic people lived in this region, the first historical document mentioning the town is dated 600 B.C.
Narni was a Roman colony under the name of Narnia, a name that comes from the Nar River, which today is called the Nera.
In 233 B.C., with the construction of the via Flaminia from Rome to Rimini on the Adriatic coast, Narni became of major importance and it was heavily fortified because the road passed through the town.

In 90 B.C., Narnia became a municipally (semi-independent) town within the Roman Empire.
The first Christian Bishop of Narni, Giovenale from Cartage, was chosen in 368 A.D. and later was consecrated as Patron Saint of the town.
Narni’s strategic position, standing as it does above the deep gorge of the river Nera, has made it a target of many invading and barbarian forces.
In the 11th Century, it established its power as a free “Comune” (autonomous town).
Between the 12th and the 14th century, it reached its greatest splendor.
In 1371, the Pope Reformed the Statutes of the city and Narni became part of the Papal State.
Narni developed a school of painting and goldsmithing. Many artists of the renaissance period produced work for clients and patrons in Narni: Rosellino, Ghirlandaio, Gozzoli, Vecchietta, Antoniazzo, Romano and Spagna.
On the 17th of July 1527, the Lanzichenecchi (northern mercenaries) stopped on their way back from the sacking of Rome and destroyed Narni.
Slowly the walls, buildings, and churches were rebuilt, and by the end of the century, Narni had been re-established.
After the rebuilding, many important artists returned to Narni, including Vignola and Zuccari. Also Sangallo and Scalza, who took part in the reconstruction of the town.
In 1664 the town library was founded. Many famous people were born in Narni, including: the emperor M.C. Nerva, Gattamelata, the Beata Lucia, Bernardo Eroli, Galeotto Marzio, and S. Cassio.

They Write About Us

A truly wonderful festival, filled with joy, beautiful music and dance.Per Johansson - Performer, Teacher
I had such a wonderful musical and personal experience in this charming, historic city. I highly recommend it!Jonathan Scott - Singer at Metropolitan Opera
I have a wonderful experience there in Narnia! I will keep in my heart the wonderful moments I had. I came back to Brazil very satisfied about my musical achievements and also the friends I have done. The teachers are wonderful. I recommend to everyone to go there. It is magical!!!Andressa Chinzarian Miguel - Singer, Brazil
…sono certa che le farà piacere sapere che mia figlia Eleonora è entusiasta della incredibile esperienza che ha avuto modo di vivere sia sul piano musicale che su quello personale.Teresa Vitale - Italia